Our objective with the Dover Pilot was to place culture in tourism settings and build lasting cultural tourism partnerships.

Cultural Tourism was a new term for Dover Arts Development but as the project progressed we began to understand that much of our work over the last 10 years has in fact been supporting cultural tourism.

We spent nearly a third of our Culture Kent budget on freelancer Jessica Wood from ‘Arts Inform’ for help with our marketing. On her suggestion we made a DAD promo film, https://vimeo.com/141990526 , found the name Chalk Up for the one-year pilot and developed a marketing campaign which was an important and valuable addition to Chalk Up.

One of our aims was to build a network of partners by bringing in new partners and deepening existing relationships. Our first Chalk Up meeting on September 15th 2015 brought together a group of 10 potential partners that formed the basis of a cultural tourism network. Through the project we were able to build the network through the various Chalk Up events. 29 partners, comprising national organisations as well as the local community, added additional financial support, by way of our sponsor and supporter packages which were part of our marketing campaign, for INSPIRATION=DOVER the final Chalk Up event on May 20th in Dover’s historic Maison Dieu better known locally as the Dover Town Hall.

The pilot enabled us to link a number of existing initiatives together under the cultural tourism theme and ensure artistic excellence was at the heart of Chalk Up. These initiatives formed a series of events bringing culture into tourist and heritage venues, illuminating, enhancing and engaging visitors in a host of new and original ways resulting in visitors experiencing their heritage from new perspectives.

Click the links below to read about these Chalk Up events:

The Chalk Up film production Weathertime: Premiered April 27th 2016 in the Silver Screen Cinema, Dover. DAD offered a workshop in Spontaneous Creativity as part of a day to bring invited cultural practitioners together from both sides of the Channel in April 2015. It was an opportunity for creative practitioners to come together and explore cross-European partnerships. The Weathertime film project grew out of this meeting, the majority of the participants in the workshop participating in the film. The 30-minute film, with works from 30 selected artists from England, France and Belgium, brings together a visual diary of the weather across the ‘maritory’ of the Straits of Dover during September 2015 .

We are delighted that Weathertime is now part of the DFDS Ferries onboard screenings for passengers between Dover and Dunkirk, available to view in the premium lounge onboard and in other public areas of the ship, including the café lounges.

“We carry an average of around 8,500 passengers on the Dunkirk route every day which totals up to almost a million passengers over the course of the summer months. Many of them will see the film during the journey as they move around the ship” (DFDS)

The Culture Kent pilot has enabled us to realise that when one understands museums and heritage sites as visitor attractions then with artists making contemporary works, which will become part of the museums accessioned collections, starting the process of contemporary collecting, then the project is a cultural tourism project. It is a matter of focus, with the pilot giving us that cultural tourism focus. The exhibition and concert were a wonderful celebratory end to the pilot.

The Pilot is now completed but we have an exciting Legacy project, informed by our experience. DAD is a member of the Dover Coastal Communities Team and has submitted a proposal for “Chalk Up Destination Dover” a cultural tourism place making project, continuing the work started with this pilot.

We aim to create a coastal cultural trail for walkers and tourists stretching from Capel Le Ferne to St Margaret’s Bay drawing attention to the outstanding 21st century architecture and artworks on the trail and supporting the sustainability of tourism businesses along Dover’s Coast. Many of the buildings created in response to this area of natural beauty and coastal weather conditions have received important industry awards. Funding dependent, the trail will provide a new exciting cultural tourism offer to Kent.

The funding through Culture Kent helped us with a shift in focus to cultural tourism and to understand audience as visitors. It has helped raise our profile with stakeholders and shown our network partners how culture can also be a driver for many of the town’s ambitions to create a sustainable economy and make Dover an attractive destination not just a place to pass through.

We are very grateful to Culture Kent for the opportunities and learning the pilot provided.

Summer of Colour pilot in Margate (Moving with the wind by Carlos Cortez). Photo Manu Palomeque 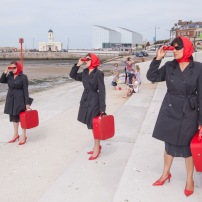 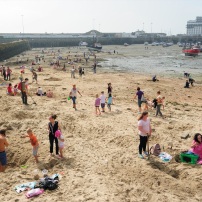 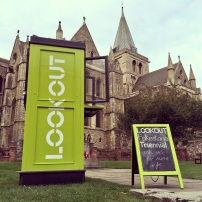 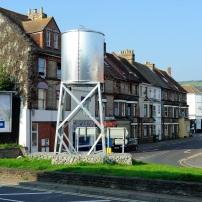